We wanted to share with you all the fantastic work our members, landlords and tenants are doing to support their communities. In this article we feature the dedication and commitment of everyone working to support the Ferguslie community.

Ferguslie Park Housing Association (FPHA) and its charitable subsidiary. The Tannahill Centre have been working with a number of other local community organisations to deliver a bold and dynamic response to the COVID-19 securing nearly £250,000 in investment from trusts, foundations and the Scottish Government.

Recently the housing group and its partners drafted a community-led COVID-19 Recovery Plan for Ferguslie and has been awarded £75,000 from the Scottish Government’s Adapt and Thrive Fund to continue delivering activities that address poverty and tackle isolation created as a result of the COVID-19 pandemic.

Catrina Miller, Group Chief Executive at the Tannahill Centre says, “I think it’s safe to say that we are all finding lockdown difficult, and getting this immediate help can make a big difference.  We’ve been unable to meet friends and family who are often our support network, at the same time many of us are stuck at home with the same people 24/7 with no breathing space. “Many of us have been worrying about friends and family who are key workers or unwell, worrying about jobs and worrying about education.  It’s all very stressful, and we hope this new service will support people deal with this”.

Whilst closed to the public, staff and volunteers from both organisations have continued to work together with other organisations to provide as much support to tenants and residents as possible.

The work of both organisations focused on The Tannahill Centre which is the base for  Renfrewshire-wide food distribution hub for the voluntary sector, with staff and volunteers from Kibble, RAMH and Renfrewshire Council working together to get food out to local people across Renfrewshire.

The Tannahill Centre recruited local volunteer, Terry McTernan as an Emergency Response Worker. He has been working closely with local group, the Darkwood Crew to distribute emergency food packs, energy vouchers and other welfare resources to those in need using a bus donated to the Tannahill Centre for the duration of the pandemic by Community Transport Glasgow.

Terry McTernan said: “This is a fantastic opportunity to tackle issues such as food insecurity and fuel poverty in the local community. These issues existed before COVID-19 however have been exacerbated in the current crisis. I’m looking forward to continuing this fundamentally important and far-reaching program.”

Ferguslie Park Housing Association also expanded the capacity of their Welfare Support Team. Home Improvement Assistants Christine Hay and Robert Murray have been delivering home cooked meals to those who have been unable to make it out of their house since the pandemic hit. 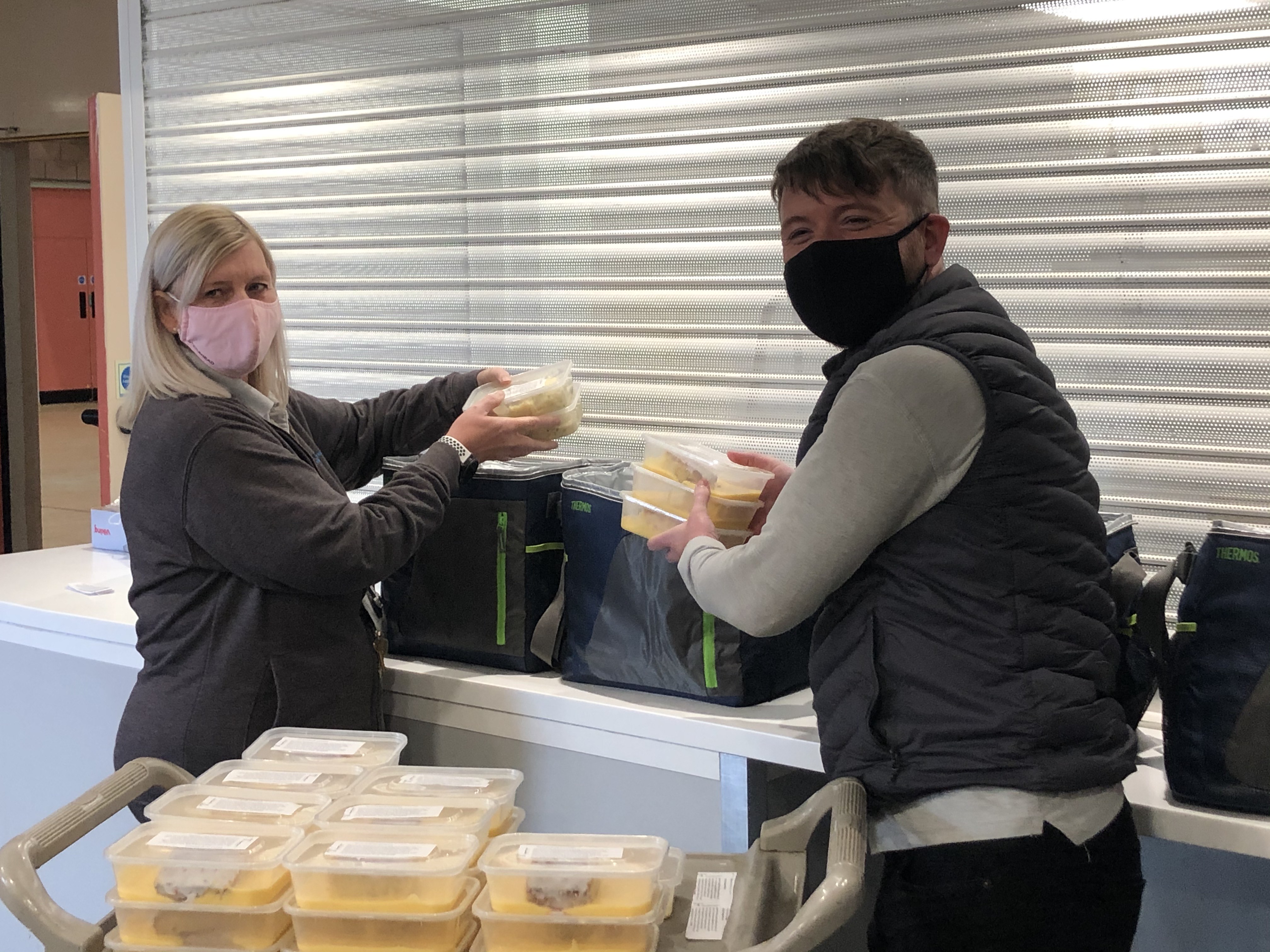 Robert added: “As we have got to know people and their circumstances, we’ve been able to refer them onto other services or make enquiries on their behalf.
“We’ve also helped people access our welfare rights service or purchased a microwave, cooker or digital devices on their behalf via our Ferguslie Essentials Fund.”

So far, Christine, Robert and their colleagues have supported local people access £10,000 of support via the Ferguslie Essentials Fund, providing people in Ferguslie Park who otherwise would be unable to purchase them with white goods, digital devices and hygiene packs during the Covid-19 pandemic.

The Tannahill Centre café closed to the public back in March when the UK Government initially announced lockdown measures. While the café is still closed to the public, thanks to the support from Ferguslie Park Housing Association it’s learning kitchen was able to reopen, providing local young people with the opportunity to restart their placements, learning how to prepare the meals that are being distributed to local people stuck at home. 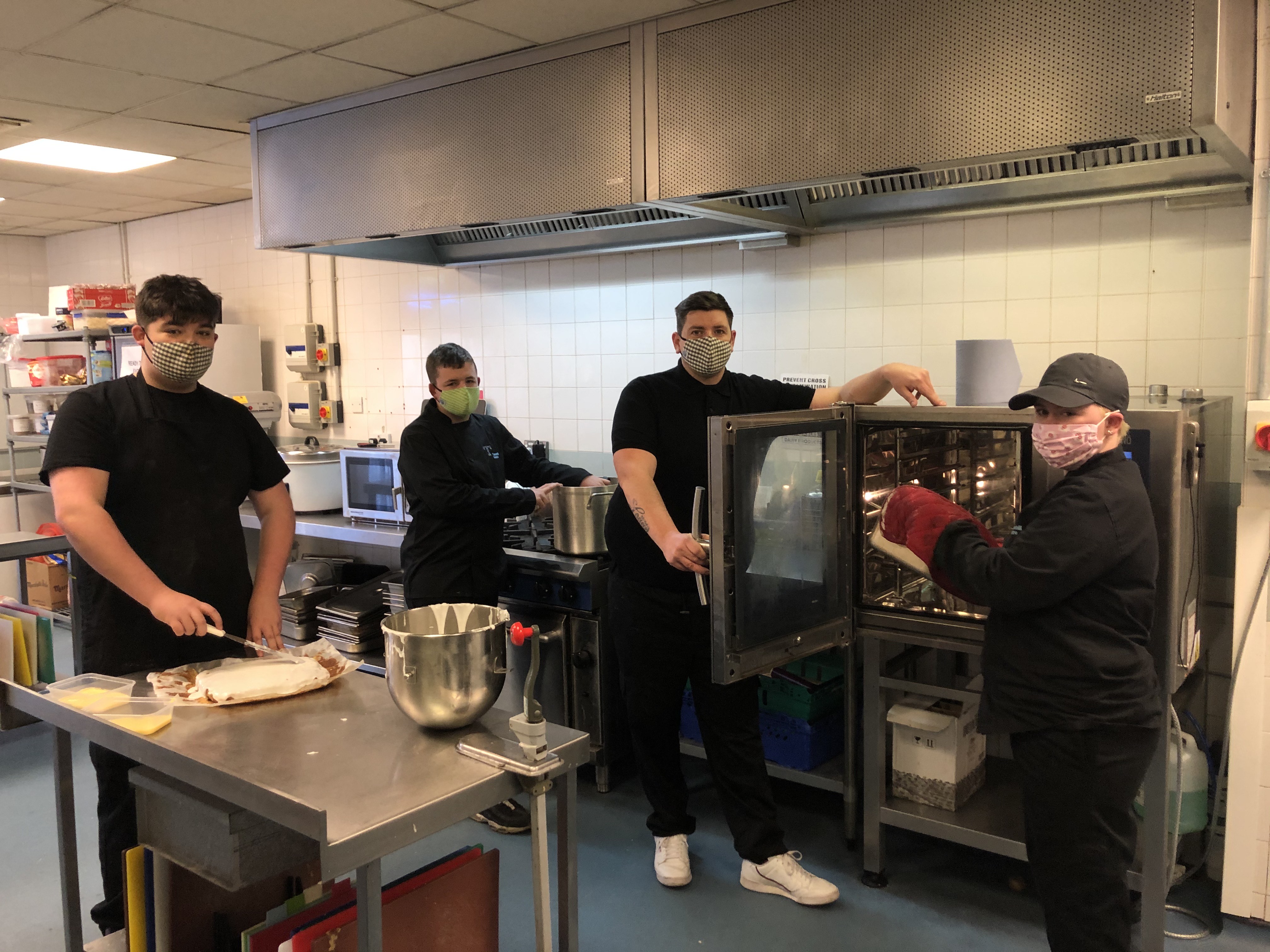 Wullie Clark, Senior Cook at the Tannahill Centre community café, said: “As well as providing vulnerable people with a decent meal, the young people are getting back into the workplace, learning how to work in a kitchen and getting a head start when it comes to getting a job in the hospitality industry when things get back to normal.“ So far we’ve been teaching the young people how to work safely in a kitchen, how to prepare and store meals as well as how to follow social distancing measures. We hope this training means they will be well prepared for the world of work once their placement ends.

He added “Many of the people we deliver to are our regular customers, for many this might be their only decent meal of the day, so there is still a big need for this service whilst the café stays shut.”

Efforts have also been made by the housing group to support local people maintain good mental health and stay connected with their community.  Working with national counselling charity, Lifelink, a telephone counselling service was established for people living in Ferguslie Park. Counselling sessions take place with a fully qualified counsellor over the phone or by video call, with each session lasting for an hour.

Those accessing the service will benefit from up to eight counselling sessions, usually taking place on a weekly basis.

Its all child’s Play

In addition to this hundreds of children in Ferguslie were encouraged to get creative during the summer thanks to innovative activity packs created by the Tannahill Centre.  The centre is usually a busy hub for children during the summer months, with dozens of clubs and activities scheduled to keep them entertained.

However, the Covid-19 pandemic halted all of the usual plans at the Tannahill Centre, so staff decided to take some of the fun to kids at home.  Together with charity for young people YoMo, they have put together packs containing a number of arts and crafts and different activities to be delivered to children of both primary and secondary school age.
Gordon Larkin, from the Tannahill Centre, said the packs were originally created as part of the centre’s 25th anniversary celebrations.  The community centre is at the heart of the area had asked people to sign up to receive party packs which contained everything needed for a celebration.

Around 200 bags were distributed by volunteers and people were then asked to spend the week preparing – making a poster, birthday card, bunting and a cake all ready for a party.
But they proved such a hit, they decided to expand the project and turn them into activity packs for kids. 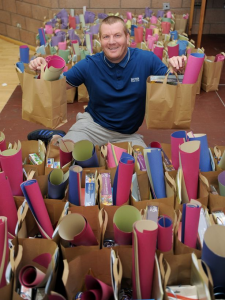 Gordon said: “The activity packs were originally put together for the anniversary but they were really popular.  We usually have so many things planned throughout the summer and it has been a shame that this year we have had to put everything on hold.”

“The feedback we’ve received from families has been incredibly positive.  Parents tell us how much fun they have had spending time with their children, doing stuff they ordinarily wouldn’t have thought off.  They’ve told us it’s had a positive effect on their children’s mental health as it’s not only given them something to do during the summer weeks, it’s also given them something to look forward to” 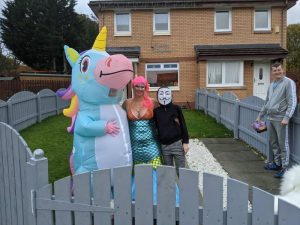 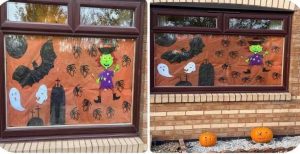 Ferguslie Park Housing Association provided additional resources to allow the activity packs to continue into the winter months, with the Tannahill Centre organising a pumpkin trail and reverse trick or treat at Halloween, and the Housing Group and its contractors are teaming up to deliver a number of COVID-safe Christmas celebrations throughout December.

Well done and thank you